There were some wet and wild (figuratively and literally) races on Friday night at the Big Sky States Games' Montana Mile. This was the 16th running of the men's race and the 8th edition for the women. The records in both races were set in 2001 - with Chuck Sloan setting the men's standard @ 4:12.2 and Nicole Hunt the women's @ 4:59.8.
For only the second time in the 23 years of the State Games, the Opening Ceremonies were plagued by rain and wind. Although spectator attendance was down due to the weather, at least 750 hardy souls stuck it out. And, from the noise they made during the race, they were excited to see the best milers in Montana take to the track.
Unfortunately for the women, the skies decided to open up a bit and the rain was really coming down as the gun went off. The cool weather, 65 degrees, would have normally been a welcome sight for the runners. Unfortunately, winds of up to 20 mph made the racing conditions less than ideal.
Once the gun went off, the women put the conditions aside and focused on running fast. Right from the get go, the women's race split into two packs. Bridgette Hoenke (Billings Senior grad, incoming sophomore at U of M), took the pace out at about 74 seconds. Right behind her were Lois Ricardi (Gardiner native and just wrapping up her Senior year at Idaho State) and Sarah Graves (Sidney native, grad of MSU-Billings). The second pack was comprised of high schoolers Emily Moorehouse (Glascow), Alexa Aragon and AurLea Fain (Billings Senior) and Elizabeth Spartas (Bozeman). 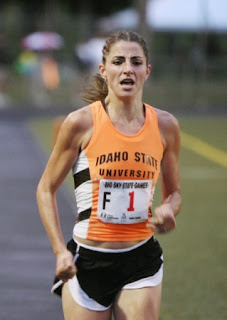 By the 800, Ricardi had taken the lead and had control of the race. At about 1K, she made a commanding move and had full separation from the field. By this time, Graves had moved into 2nd place and Hoenke was into third with a 25 meter gap back to the rest. The H.S. crowd was running in a very tight pack and it was clearly going to be a close race for 4th place.
But the race from 1,000 meters on was all Ricardi. Since winning the Montana Mile last year, she had taken another step in performance at Idaho State. By the end of the year, she was the school record holder in the 3,000 meter steeplechase. It was evident that she was now after the record. But, the weather and running alone were a bit too much. She was going to need a sub-70 second lap to get the record and it just wasn't in the cards. She hit the tape at 5:04.6, still a solid time for a collegian in mid-July.
Next in was Sarah Graves at 5:20.6. Sarah has really reached a new level with her running in the last two years and may be the most versatile women's runner in the state right now. Last October she missed qualifying for the Olympic Trials Marathon by less than a minute (running 2:48+), ran in the elite women's field at Boston in April, and is also competitive in triathlons.
3rd went to Bridgette Hoenke at 5:23.4. She was followed in quick succession by Moorehouse in 5:28.8, Aragon at 5:31.0, Spartas at 5:33.3 and Fain at 5:35.7
By the time the men's race started, the rain had let up and the 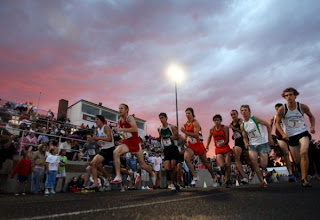 race began under a beautiful sunset. The winds were still a bit strong; but, just like the women, the men were all business once the gun sounded. The rumor had it that John Ricardi (a senior to be at Idaho State) was gunning for Chuck Sloan's record. Dane Steward (Plains native, Garden City CC grad) had been gearing for this race all season and was also ready to run fast.
Also in the race were Patrick Casey of Laurel (soon to be MSU frosh) and collegians Zach Nordhal (Rapalje/Air Force Academy), Lynn Reynolds (Dillon/U of M), Zac Barrett (Manhattan/Idaho State) and Forrest Lewton (Whitehall/Azuza Pacific). The High School crowd was represented by Alex Brekke (Bozeman), Robbie Brooks (Missoula Sentinel), Caleb Bentley (Lewstown), Michael Asay (Manhattan) and Josh Dean (Billings Skyview). The requisite old man in the field was Alan King (Billings West, Dakota Wesleyan, Big Sky Distance Project).
Robbie Brooks unexpectedly took the race out in the first lap. Having just placed third in the Missoula Half-Marathon last Sunday (1:12+), he didn't let that dissuade him from going out hard with a 63 second opening lap. The fast early pace broke the pack up quickly. With a lead pack of Brooks, Ricardi, Casey and Steward, the rest of the group was scattered into two semi-packs.
By about 600, Brooks had fallen back and it was obvious from early on that the race was going to be dictated by the front trio. Steward took over the lead by 800 and hit the line at about 2:08. At around 1,000, Casey and Ricardi had moved to the front and Steward was beginning to drift back. Meantime, Zach Nordahl was beginning to separate from the chase packs and was in a solid 4th position.
The 1,200 was hit at about 3:12; and it was clear that something special was going to have to happen for he record to get taken down. Casey was running on the inside with Ricardi on his shoulder. John made a move to take the lead as they entered the penultimate corner, but Patrick immediately responded and the real racing was on. They were all out, side by side, down the backstretch and into the final curve. 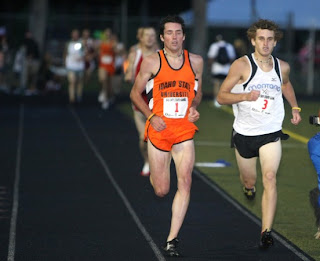 Finally, in the last 75 meters, Patrick was able to pull away and cap off a spectacular senior season with a P.R. win at 4:17.7. His win signalled a season in which he went undefeated in cross country and won the 800, 1,600 and 3,200 at the State "A" track meet. For a young runner, he possesses some great instincts and racing tactics. By all accounts, he has the potential for a bright collegiate future.

Although Ricardi wasn't able to join his sister on the winner's stand, he ran an exceptional race. With plans to red shirt the upcoming XC season, John has plans to build his strength over the fall in an effort to be prepared for taking the next step upward for his final indoor, outdoor and XC seasons in 2009. John ran strong to the finish in 4:19.8 for solid 2nd place finish.

Special thanks to Karen Gall of the BSSG for continuing to conduct this race as one of the signature events of the opening ceremonies. It's really unlike anything else in Montana track and field. Also to be recognized for their parts in the race are Dave Coppock of MSU-Billings for coordinating the start and timing, Mike Carrigan of MSU and John Sybrant of the BSSG.

The Muddy Buzzard
Posted by Tony B at 2:10 PM