Not Quite Enough Lives

Last Father's Day, my wife and daughter gave me a gift of two "outside" cats (they were little kittens at the time) to help with controlling the mice and pack rats around the house.

Being around the time of the Olympic Trials, I named one of them Hayward (in honor of the U of O track and field complex - Hayward Field - the mecca of US Track & Field - the centerpiece of Track Town USA).

The other I named Tiger. In recognition of Tiger Woods - who won the US Open that weekend in dramatic fashion - with the bum knee and everything.

Last summer, as a young kitten, Tiger was bitten by a rattlesnake. He was about 90% paralyzed. But, my daughter nursed him back to health and he survived the ordeal. Those that made it to Camp Vermillion last July will remember the two kitty's as our unofficial camp mascots. (I brought them to camp since Tiger had been bitten just during the middle of that week and he was still recovering from the effects of the venom.) 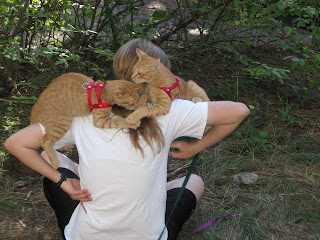 Lately, the cats had been prowling a bit. In fact, Tiger had taken to making a daily trip to my mother-in-laws (about a one mile round trip through the woods and over a few hils and ravines) to court her female inside cat. They've also taken to fighting amongst themselves and getting a bit uppity. So, we figured it was time to take them in and get the old snip-snip.
One of the things that we found out when we took Tiger in for his rattlesnake bite was that he only had one testicle. Well, turns out he had two - but; one of them had just not descended. So, it became fairly major surgery for the vet to find it and remove it. That was another week long recovery. But, he bounced back from that as well.
We had been hoping that after his recovery and with a reduced testosterone level that he would quit trekking to my mother in laws. But no - on his second day back outside he was heading right back to her house. Generally he would take off in the late afternoon and show up after dark. A few nights he wouldn't show up by the time we went to bed. But, he would still show up by morning.
It was always a bit nerve wracking - there's no shortage of coyotes, owls, eagles, hawks or other predators around the properties. Yeah, I know that they are outside "barn" cats. But, you still get attached to them.
Well, last night Tiger didn't make it home. And, he was nowhere to be found this morning.
This afternoon, I was taking my ATV over to my in-laws' place. Somehting caught my eye up on the side hill. It was a piece of windblown debris. As I went over to pick it up, I saw a dead bighorn sheep at the bottom of a rock outcrop. (The sheep were all over the place this past week; and, quite a few were out on the highway licking salt off the road surface.) I suspect the young ram was hit by a car and made it over to the outcrop to die. He was a pretty fresh kill; and, he had been getting eaten on.
Well, I happend to look up above the outcrop and there was Tiger, laying dead on his side. As I checked him out, he had been bitten on the head and it looked like he died of head trauma. I suspect he suprised a coyote that had been eating on the sheep and came out on the loseing end of the fight. He had obviously used up the last of his lives.
We buried him on the hillside and put up a little cairn as a memorial.
Like I said - a barn cat; but, still was attached. So, here's to Tiger. Farewell little buddy.
The Muddy Buzzard.
Posted by Tony B at 8:10 PM