Holy Crap It Was Cold 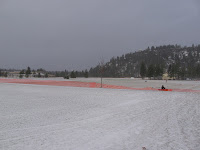 I think that this picture pretty accurately portrays the conditions that we saw earlier today in Spokane. It was perhaps the worst conditions that I have ever raced in. 25 degrees or so, 10 to 15 mph winds and light snow cover. It was brutal. But, that was the good part of the day. By the time that the open men hit the course, it was 20 degrees and 20 mph +. It was not pleasant.

In spite of the conditions, fun was had by all those that braved the trek. Given the weather, the team logistics and all the other factors, it was so much more than just a race. It was an adventure. To use a favorite term of my Billings friend Coah Jay - it was an epic day.

Performance of the day was Matt Winter. He ran with the top tier throughout the race, looked great, and ended up with a 33:08 10K on a day that was far less than conducive to fast times.

Next up was Alan King. Although not as sharp as he would have liked, he still pulled off a 34:30ish performance. That's a time most of us are striving for on a nice day on the roads. It was a studly performance in the wind and on the snow.

Matt Seeley was the #3 guy and ran a strong, solid race from start to finish. Dewey Peacock had a bit of an off day; but, survived the conditions. Chuck Dumke, who had come along with Matt Seeley as a spectator, filled in for the late scratch of Jimmy Grant. He gets an all star award for racing and allowing the open men to have a scoring team.

Ray Hunt ran super on the men's masters side. Like Matt Winter, he was along the tail end of the top tier runners and pulled out a 37:15.

John Herring ran in as the number 2 guy in about 38:45. Tony Banovich was able to make some improvement since MT Cup and was our 3rd guy in 39:20.

Kirk Keller had been battling some illness in the 5 weeks since MT Cup; and, unfotrunately it caught up to him today. Tom DeLuca and Craig Kenworth rounded out the team finishes. But, due to a "wardrobe malfunction" of the timing chip variety, they didn't make it into the official results.

The open women ended up with only two runners. Jenni Brown of Polson looked great the whole way. She was running strong on the two 3K loops and had a great performance. Nicole Hunt had an off day; and, as seemed to be the case with many athletes, her success today came from surviving the conditions.

Demaris Taylor was our lone master's women. She started off the day of racing as a flash of gold and black.

For full results, check out the USATF site at http://www.usatf.org/events/2008/USATFClubXCChampionships/schedule.asp