Had a great time last weekend sandwiched around the Montana Cup.

Went over to Billings on Wednesday evening for some business at the home office of Sanderson Stewart on Thursday and Friday.  Friday night headed over to Kelly & Liz Fulton's to spend a couple of nights.  We started off the weekend with a couple of hearty brews at Carter's Brew Pub on Montana Ave.  That was the first time that I had been to Carter's; and, I'm hear to tell you - it's some of the finest brew that I've had...........................ever.  We finished off the night with a nice pasta topped with a pheasant burger meat sauce.  Liz rocks the kitchen!!!!!!

Up early the next morning and headed out to the Rocky Mountain College Equestrian Center NW of Billings on Highway 3.  It was a lot of un helping Alan King, Brad Coutant and the rest of the Rim Runners finish setting up the course and getting ready for the onslaught of runners.  And, did the runners ever come.  Some 214 men and women, boys and girls toed the starting lines.

First up were the women.  Using a strong push over the last half of the race, Sarah Graves of Billings took home the win over high schooler Dani Aragon (Billings) and master's stud Nicole Hunt (Butte/Deer Lodge).  Sarah's win came just a couple of weeks after a 2:55 marathon performance in Chicago.  Sarah continues to amaze me with her ability to run races at any time at any distance and always turn in top level performances.

The men's race was settled pretty early.  At the top of a climb right after 2K, Alan King put in a hard surge, opened some daylight and put the win to bed.  In the end, he had a 20 second win over Mike Wolfe and Dominic Smargiassi, both of Helena.

It was a perfect day for cross country running.  Maybe in the '50's, some light clouds, little to no breeze, and dry.  The course was fantastic.  A few hills to make it a challenge, some footing that was sketchy and vistas that were limitless.  Alan King did a great job of setting out the course, making it so that no one was going to get lost and having accurate mile and kilometer marks.

The Yellowstone Rim Runners did a great job of hosting the event.  Packet pick up was seamless.  Results (courtesy of Becca King) were quick and accurate.  The awards were unique.  And, the amount of post race food was enough to leave everyone with a full belly.

For more on the results and a great race write up - check out http://www.montanacup.com/.  Ray Hunt did his usual great job of capturing the essence of the day's events.

As for me - the results were dismal.  But, see other posts for some reasons behind that whole train wreck.  But, I had a great time out on the ranch.  How could you not - watching the Helena bus pulling up and spitting out what seemed to be 1,000 folks in Blue.  Pat Judge and Ann Seifert do such an amazing job in getting the Helena running community behind the Cup.  Pretty easy decision to make Pat and Ann members of the Montana Cup Hall of Fame.

Watching some of the hottest competition of the year is great.  Coming one week after the State H.S. XC Championships - its a back to back smorgasbord of running over hill and dale.  Good times indeed.

After helping with some clean-up and a quck shower, it was off to the Yellowstone Valley Brewing Company's garage for some post event refreshements.  While there, some of the old Sunday Morning Run Club members had a couple of cold ones for old times sake. 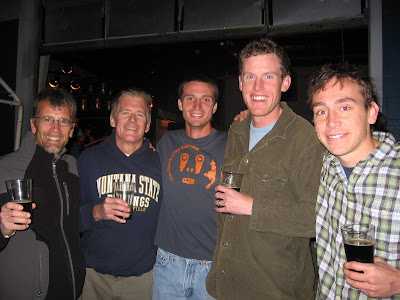 Left to Right - The Muddy Buzzard, Dave Coppock, Alan King (aka The Champ) (wearing Gerry), Kelly Fulton, Zach Hunter
A couple of more brews at Carter's (man, they were as good on Satuday as they were on Friday night).  Then finished it off with some Mexi Food at Don Louis'.  Neeless to say - it was a loud and smelly night at the Fulton house.

Sunday morning, we hit the trails from Zimmerman Park and beyond Indian Cliffs.  It was great to be out with Kelly, Alan and Zach - it had been a long time since we had convened a service of the Church Of The Blue Dome.  It was a glorious day - calm and crisp.  Just right for an hour run with your pals. 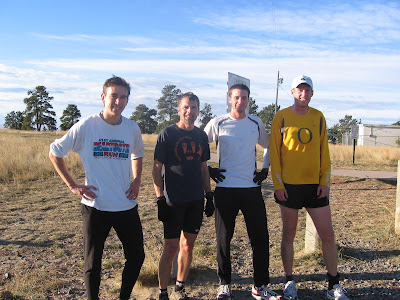 ﻿
Monday found me back at work (and still in Billings).  But had a nice run with Michael Sanderson (who happens to be my boss) out at Riverfront Park.  Hadn't been out there in a couple of years.  We did the back loops on the east side of the park (they've made a bunch of improvements back in this section), then did a loop around Norm's Island.  We got out a bit late; but, the upside was that we were able to see a magnificant sunset and finished just as dusk was settling in.  It was cool and calm - the sun just setting ----- another great run.  It was amazing to be in Billings at the end of October and have so many days of warm weather with little to no wind.  Pretty spectacular conditions.
All in all, it was just a great weekend of malts and miles (beer and running :-) )
See you on the roads, tracks and trails
The Muddy Buzzard
﻿
Posted by Tony B at 4:52 PM