Alan King will be taking a big shot at dream this weekend.  He left today for Sacramento, CA in preparation for the 2010 California International Marathon (CIM) on Sunday. 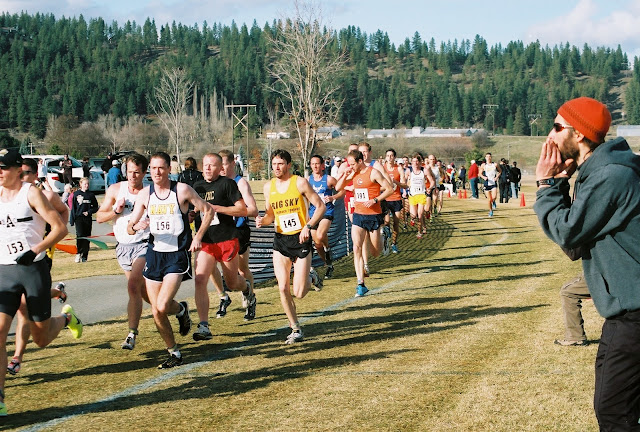 Alan Running With The Big Boys @ USATF XC Nationals - 2010
His goal - 2:19:00 or faster and make the qualifying time for the 2012 USATF Men's Marathon Olympic Trials.﻿  It's a big jump from his current PR ----- but, over the last 3 years, Alan has become a truly different runner.  And, in 2010 he's become a dominant runner on the Montana scene.
With the exception of the Bozeman Classic race in early August (where he still got 3rd place in a time in the mid-33's), he's competed at an extremely high level all year. 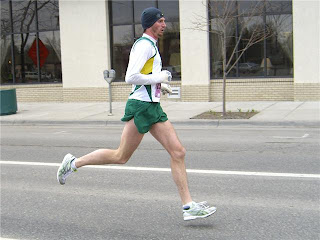 ﻿Alan @ Ice Breaker
Here's to Alan in his quest for stringing together the set of 5:18's that he'll need in order to make a trip to Houston in January 2012.  Hopefully he has some company out along the course.  CIM has offered some cash incentives to those making the qualifying time; and, CIM is known as a good, fast course.  So, the expectation is that there should be a train of guys in that 2:17 to 2:22 range that he should be able to﻿ latch onto.
Weather forecasts looks mostly good - low 40's at start to maybe low 50's at finish.  A light tailwind to quatering wind possible.  The only hiccup could be rain.  There is a 50% chance of rain, with some heavy rain forecast for Sunday night.  Let's hope it holds off until sometime after noon on Sunday (with race start at 7:00 a.m., Al should be done by 9:19 :D ).
I believe that he is number 124; and, CIM indicates that they will have race day athlete tracking ( see website at http://www.runcim.org/ ); so, get online and check out Alan's progress.
Good luck Al - Run Hard.  Run Fast.
Do The Big Sky Proud.
The Muddy Buzzard
Posted by Tony B at 1:37 PM