We all know Scott Creel as an animal on the roads and especially the trails. His Ridge Run performances are legendary. On more than one occasion he has finished the race with equal mixtures of mud and blood.

But, earlier this year he had what he describes as a "climbing injury". Too me, it looked more like his lower leg made a visit to Hannibal Lecter's laboratory. 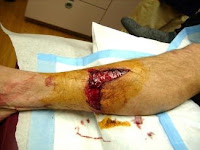 To Scott, it was just another day on the trail. Went into the doc, had them throw in a few stitches (for the sake of a good story, let's say that he threw back a shot of whiskey and told them to hell with the Novocaine) and went merrily on his way.
After taking it easy on the stitches for a few days he was back at is, good as new.
Leave it up to Creel to have the presence of mind to take a picture of the wound. Hell, you never know when scars, cuts and scrapes are going to come up in dinner conversation; and, it's always good to have a shot like this to pull out of your wallet in order to throw down the "do better than that" gauntlet.
So, next time your running down a dark back alley, take a tough bastard like Scott with you.
See you on the roads, tracks and trails.
The Muddy Buzzard.
Posted by Tony B at 7:47 AM