For the 3rd time since 2005, a group of Montana distance runners got together for a weekend of running, story telling, imbibing, and hiking.  Following on the heels of Camp Waterloo (2005) and Camp Vermillion (2008) the Helena crew (led by Pat Judge and Jeff Thomas) hosted Camp Vigilante.

Starting Friday night, we met at the end of York Road east of Helena in the Big Belt Mountains; and, took over 3 camp sites in Vigilante Campground.  Present for the full weekend were Pat Judge, Jeff Thomas, Lila Thomas (solidly representing the female side), Alan King, Evan Eck, Thomas Jodoin, Ray Hunt and Josh Panasuk (representing the kiddie crew).  For day campers, we had Chris Colberg (Saturday and Sunday morning runs) and Jesse Zentz (Sunday morning run).  On Friday night we were even blessed with a visit by Peter Dan Sullivan.  [However, his visit was made less stellar due to the fact that he arrived sans any home brew :-(  ]

Friday started with a nice 6-mile run up the Trout Creek Trail (which takes off right from the campground).  Pat, Thomas and Josh got out ahead of the rest of the crew (with Ray tagging along on his mountain bike).  Tony, Jeff and Evan got up a bit later in the afternoon.  We then waited for Alan, who was about an hour behind the rest of the crew.......................Funny Story:  Alan calls me up en route to Helena.  We meet up in Townsend and we're going to follow each other up to the camp (since neither of us had been there before, we figured that there was safety in numbers!).  As we meet in Townsend, he realizes that he left all of his clothes at home.  Running clothes, underwear, shoes, socks.  All he has is what he's wearing in the car.  So - he had to make a side trip into Helena to visit Target and Famous Footwear.  [Sorry to throw you under the bus Al; but, figured Dave Coppock would be happy to hear of another Billings runner that had a challenging road trip.]

Then, it was on to some dinner, a few brews and swapping of stories.  Oh yeah - and the seeting of the Big Honkin' Tent.  Jeff Thomas once again brought out his old World War II surplus, canvas, wall tent.  It's a monster.  But, it's great to have when you want a bit of protection from the sun or rain.

So, here were the teams.  Team Teeny Bopper = Evan Eck and Josh Panasuk.  Team Vigilante = Chris Colberg and Pat Judge.  Team Trail Kings = Alan King and Jeff Thomas.  Team Birdmen = Thomas Joidon and Tony Banovich.  Pretty quickly the relays turned into two "races" in one.  The Teeny Boppers and the Viginlantes were in a tight battle right from the start.  They were quite evenly matched and ran neck to neck all the way.  In the end, the experience of Colberg and Judge won out on the final leg of their cat and mouse game.  The other two teams were more of a tortoise and hare sort of affair.  Big Bird Joidon went out hard against Jeff The Mountain Goat Thomas and built a bit of a lead.  Then, Tony The Muddy Buzzard Banovich tried unsuccessfully to hold off Alan The King.  And, that's how it went for the 6 laps of the relay.  In then end, Alan blew by Tony in the last 200 of the last leg and easily secured the 3rd place finish.

After a bit of a cool-down, the runners were treated to a breakfast of Omelette's In A Bag by Lila Thomas. 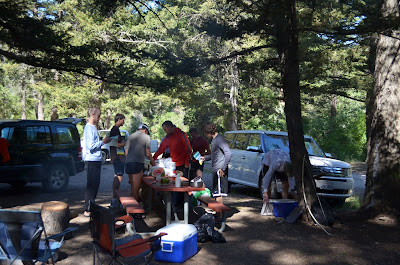 Mixin' Up Some Bags O'Omelettes
Next up was some Montana Cup business.  With 4 of the 7 Regions/Cities represented (Butte, Helena, Billings and Kalispell), we had a quorum.  So, we took the opportunity to review the status of the event, talk about the 2011 event (to be held in Great Falls) and visit about any tweaks that could make the race even better.

After being fed and getting rehydrated, the crew headed off for the next adventure - a 12-mile hike (round trip) to Hanging Valley.  It was pretty hot out; and, some of the crew had dogs that weren't handling the heat too well.  So, the puppy mill headed back after getting in about two miles.  Meanwhile, Pat, Tony, Alan and Josh did some hard hiking with the goal of getting back in time for 6:30 p.m. dinner.  It was some tough hiking; but, in the end it was all worth it.  The last quarter of a mile was through a narrow canyon bordered by towering cliffs of the Madison Limestone Formation.  And, then - the trail abruptly ends at a fenced area that keeps you from stepping off a several hundred foot cliff.  The view (which just happened to look down into the end of the Trout Creek trail taht we ran on Friday night) was spectacular. 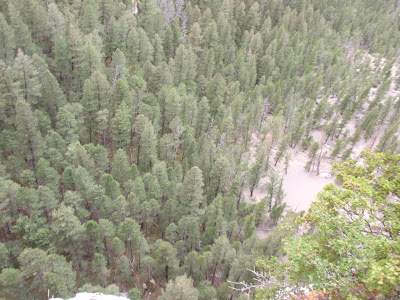 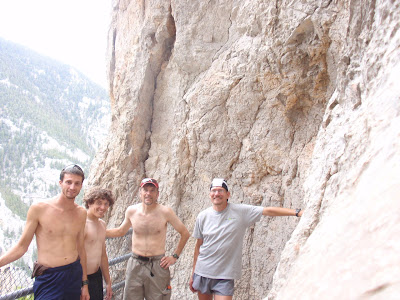 Alan King, Josh Panasuk, The Muddy Buzzard and Pat Judge at Hanging Valley
Running a bit short on time, we really had to hump it back to camp.  On some tired legs, we ended up jogging in the last 2 miles to try to make it in time for dinner.  Which, was not to be missed.  Nikki and Eric Eck - Evan's parent's - volunteered to drive up from Helena and bring us a fantastic dinner of Chicken Parmesan, Twice Baked Potato's and Fresh Fruit Salad.  Add a Sam Adam's Boston Lager and it was the ideal refueling meal at the end of a long day.
Then, it was on to some videos.  Ray had a bit of footage from Wulfman.  Pat had a nice vid from the 2008 Cup.  Then we got to see a great 5,000 with Pre, Shorter and George Young from the 1971 AAU Meet, the 1971 Dream Mile at the Penn Relays with Marty Liquori and Jim Ryun, and a quirky video about ultra runner Anthony Krupickza (sorry if I hammered the spelling of his name there).  By then, the beers made us all a bit sleepy - puls we heard the trail calling for Sunday's run on the Refigerator Canyon trail and into the Gates of the Mountains Wilderness.
It was a 30-minute drive from camp to trailhead - where we met up with Jesse Zentz (Billings Native, UM Alum, current sports writer at the Helena Independent record).  Off we went at 10:30, already about 80 degrees out, heading up Refrigerator Canyon and into the Gates of The Mountains Wilderness.  The trail featured plenty of  climb going out - which meant cranking down the pace when coming back in.  It was a bit hot out; but, it was a great final run for camp. 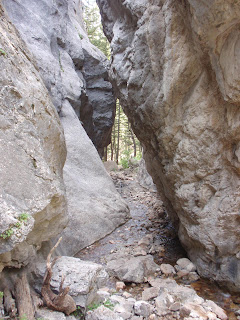 Slot through the rocks on the lower part of Refigerator Canyon 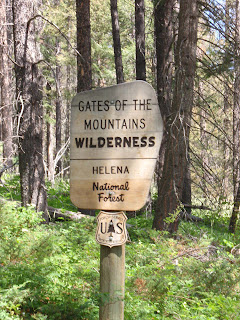 How many people ever get to see wilderness areas?
And we got to run several miles into it!!!!
But, camp wasn't quite done yet.  We had to do some refueling - and York Burgers and drafts of Cold Smoke Scotch Ale were the perfect recipe.  Then - the super secret manly challenge.  So secret that Pat Judge wouldn't share the details; and, turns out he ended up being the only one with the necessary tools for jumpinf off the York Bridge and into the Missouri River.  So, even without towels and water shoes, 5 of the campers were up to the challenge.  Pat, Tony, Thomas, Alan and Evan all made the stupendous "Leap of Death". 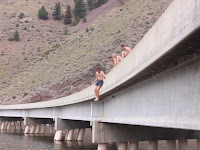 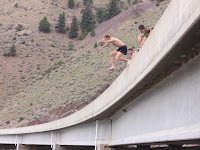 ﻿
Big Bird (left) and The Muddy Buzzard (right) take flight off the York Bridge
And the, it was time to break down camp and head back home and the real world.  But, what a great way to spend a weekend.  Hanging out with some pals, runs on great trails, stories and laughter.  What more could you want.
My recommendation is that when you get the chance for this type of camp/gathering/fellowship/ect. - take advantage of it.  These types of opportunities make for great memories and great friendships.  Good times indeed.
See you on the roads, tracks and trails
The Muddy Buzzard﻿
Posted by Tony B at 1:22 PM