The Sum Of The Parts

Not really the numbers I had hoped for htis year.

But, the 2011 log numbers are now behind me.  Time to be optimistic about 2012 and look for better things starting tomorrow.

The Muddy Buzzard
Posted by Tony B at 5:04 PM No comments:

Making The Best Of A Bad Situation

As soon as I found out that I would be booted up, I took a day to wallow in self pity.  What the hell.  I've only had a few injuries that have required significant amounts of non-running time - far less than most runners who have been doing this as long I have.  So, I figured I was due at least a 24-hour period of laying around saying why or why did this have to happen to me.

But, I pretty quickly decided that it was then time to move forward.  And, it seemed like the perfect opportunity to find a way to achieve some general fitness goals.  For the last couple of years, I've notice some general lack in overall muscle strength and power, stride length and overall flexibility.

So, while I can't be running, I've added a whole host of exercises to my daily routine.  I'm getting in about an hour a day of workout in.

I've been starting with a series of dynamic flexibility drills.

Then, I move onto a routine (which varies pretty much every day) that involves some combination of core work, leg strength work, hip strength and flexibility and some light upper body work.

I then go directly onto the recumbent bike (my boot fits into the pedal straps) for 30 minutes or more of work.  This usually involves 5 to 10 minutes of warm-up at low resistance.  Then I'll do 20 to 25 minutes of some form of interval work.  I try to up the resistance during the hard sections (while always maintaining 90 rpm's) and trying to get my hard rate up into the mid 120's or low 130's (at a minimum).

Then, I finish up with some static stretching.

On top of that, I've been having 2 or 3 days a week where I have to put in 30 minutes of snow shoveling (per day).  And, I've had several days in the last 2 weeks where I've spent 60 to 90 minutes of splitting wood (which is now behind me since I have all the wood split).

It turns out that I've been able to get in quite a bit of work in spite of the added bulk of the boot.

Only time will tell; but, I'm feeling good that this time off running - and forced use of alternate training methods/opportunities - will set me up for a fitter, stronger Muddy Buzzard for 2012.

Until then, see you in the gym, on the machines and the mats

The Muddy Buzzard
Posted by Tony B at 7:09 PM No comments:

So, something seems to be missing from my Christmas day today.  What oh what could it be?

How about an Xmas day run - for the first time in many, many years I won't be heading out on the roads this holiday morning.  In fact, I can't really remember a Christmas over the last 30 years or so that I haven't gotten out for my miles.

But, that's what a metatarsal stress fracture will do to you.  Not much running to be done in das boot.

Don't worry though - I'll find a break between now and dinner to get in 30 minutes or so on the stationary bike at the gym.  Especially with it being Sunday, need to worship the mileage gods (hopefully the stationary bike will placat them) and attend services in the Church Of The Blue Dome (with the windows in the gym, I can see the Blue Dome - so, we'll have to call that good!!).

See you (eventually) on the roads, tracks and trails

Merry Christmas to one and all from the The Muddy Buzzard.

We're having a white christmas here in the northwest.

The 4 cats and the dog are all in the house.  The music is playing.  The gift wrap is on the floor.

The Muddy Buzzard
Posted by Tony B at 11:26 AM No comments:

Saw the doctor yesterday.  And, the news was not so good.  Took a x-ray of my right foot; and, as I feared, there was a stress fracture of the bone at the base of the 5th metatarsal.

Fortunately, it was a complete fracture, and there was no displacement of movement of the bone.  And, since I haven't run in two weeks or so, you could already see evidence of healing.

But, am now in a walking boot for the next 4 weeks.  And, the visiting orthopod suggests between 2 and 3 months before running again.  Turns out, due to the location of the fracture, it's susceptible to re-fracturing if too much stress is put on it too soon.  So, looks like my winter is shot.

Now, need to find some way to try to stay fit while I heal.  Am going to try elliptical and stational bike to see if I can do them in the boot.  Sure hope so.  And, expect to be able to do many of my normal core and stenghtning exercises.

The Muddy Buzzard
Posted by Tony B at 2:43 PM No comments:

Hasn't been the best month for the Buzzard.

Early in the month - saw the cardiologist for a 6-month follow up visit.  Haven't seen any improvement in cardiac function.  And, they are once again talking about a defibrillator.  I'm working to get a 2nd opinion before making any decisions - but, it really wasn't the news that I was wanting to hear.

On the upside, the doc's didn't put any restrictions on my exercise or workout routines.

But, my own body is doing that to me.  By the end of XC season, was having some problems with pain on the outside of my rigth foot.  Was more or less holding it together through the end of the season - but, went on a trail run with Julie Gilchrist, Mike Foote and Anders Brooker the morning of the NXN regional meet in Boise and that seemed to put it over the edge.  In the last couple of weeks, it's gotten to the point of not allowing me to run.  So, have an appointment with the doc on Tuesday to see if there is any type of stress fracture.  Here's to hoping for the best.

And, here's to hoping that the holidy season and the first of the year see the Buzzard healthy and ready to be back out on the roads, tracks and trail.

Been a big last week for Montanan's on the running front.

On December 3rd, Mike Wolfe of Helena won the North Face Endurance Challenge 50-Mile Championhsip in San Francisco.  Wolfe took down some of the big names in the ultra world, including Dakota Jones and Geoff Roes.  Also representing MT was Mike Foote of Helena - who scored a big 9th place overall finish.  Results are here:  http://www.sportstats.ca/display-results.php?lang=eng&racecode=101612


On the 4th, Sarah Graves of Ballantine (outside of Billings), successfully fulfilled her 4+ year quest to qualify for the Olympic Marathon Trials.  Having made multiple attempts at the "B" standard of 2:46:00 - she had come close on several occasions - running a couple of races in the low 2:47 range (and, one in the high 2:46's I believe).  On Sunday, she ran a spectacular 2:44:25 with even splits of 1:22:11 & 1:22:14.  Congratulations to Sarah.  Good luck in Houston.  Reults here:  http://www.flashresults.com/2012_Meets/CIM/searchind/Results.htm

This past weekend was the USATF Club Championship Cross Country meet in Seattle.  Multiple Montanan's were present.  In the master's women's side, Jenny Newton, Mary Thane and Jennifer Burke competed as a team for Mountain West TC and brought home a 3rd place team tropy.

On the men's side, former Montann's Brent Winegar and Kevin Murphy also competed for the Club Northwest teams.

Also, this past weekend, Makena Morley of Bigfork placed 9th in the Footlocker Cross Country Championships in San Diego.  She was the highest placing fresman in the meet.

All in all, a pretty impressive last week for Montanan's.  The Big Sky studs shows that they belong on the national stage.

The Muddy Buzzard
Posted by Tony B at 2:49 PM No comments:

The Buzzard took a nice little break to Costa Rica over the last week.  It was a big trip for the family.  In attendance were me and my wife, my brother and his family; and, my older sister and her family (including her 3 boys, 2 daughters in law, and 3 grand kids).  There were 17 total of us and it was largely a celebration of my parent's 60th wedding anniversary this summer.  It may be the last big trip we get to take with our parents; and, we enjoyed it thoroughly.

The week was dominated by lots of reading, relaxing and good eats.  But, we still had time to fit in a bit of fun.  Zip-Lining though the jungle canopy, snorkling at Isla Tortuga, swimming in the ocean, exploring the beach, and shopping in Montezuma.

Here was our beach outside of our rented house: 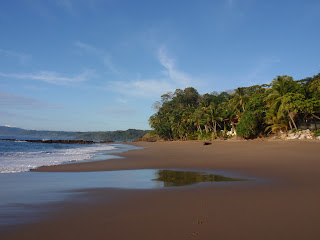 And, here is the beach area where I did my core work, strenght exercises and stretching every day.  Not a bad workout room!!!! 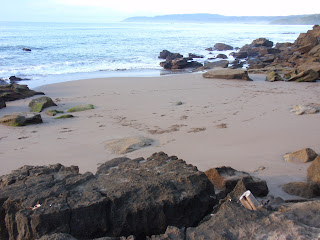 But, now the Buzzard is back to reality - sub-freezing temps, freezing fog and the dreaded four letter word - WORK :-(
It was a great break though and the first extended time off in a couple of years.  It was well worth the time with my family and the trip will be remembered for some time.
See you on the roads, tracks and trails.
The Muddy Buzzard
﻿
Posted by Tony B at 10:31 AM No comments: