That pesky thing known as life has gotten in the way over the last couple of weeks and has resulted in me being way behind in getting summaries done for the USATF Cross Country Championships in Spokane about 10 days ago (February 12th).

Let me start with the open women's and men's races.  At the front end, the women's race was pretty much an open and shut book.  And the title of that book was Shalane Flanagan.  The American record holder at 10K (track) and the Bejing bronze medalist at 10K, Flanagan was clearly in a league by her own today.  Even though Molly Huddle of Saucony tried to run with Shalane for a while, Shalane was clear of the field by 2 kilometers and just grew her lead throughout the race. 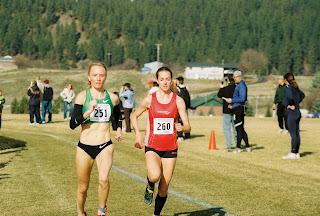 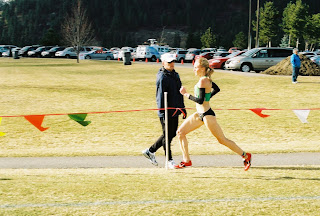 In the end, Flanagan finished up about 300 meters ahead of the chase pack, winning by 51 seconds in a 25:09 over the 8K course.  Rounding out the top 6 and having the opportunity to represent the team at the World Championships in Poland were Molly Huddle, Amy Hastings, Magdalena Lewy Boulet (who is a Polish native), Renee Metivier Baillie and Sara Hall.  Could be a relatively strong team; but, if history is a guide - at least a few of the top 6 will choose not to go to worlds and the team will be weakened.  On the up side, Flanagan announced that she will go to Poland.  She seems to have a renewed focus to her running (after a bit of a let down in 2009); and, she could be a strong contender for a top 10 finish, with an outside chance at a medal.
From a Montana perspective, we had 3 women running - all from Missoula and representing the Mountain West Track Club.  Megan Lerch, Rye Palen and Jenny Newton had so much fun at club nationals in Louisville, KY in December that they decided to make the couple of hour drive west and hit the Plantes Ferry Park course. 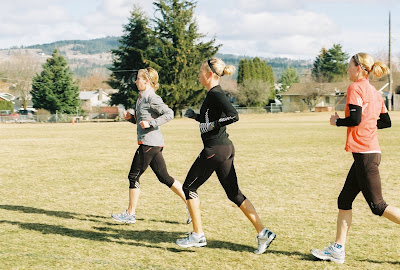 Meg, Rye and Jenny warming up prior to the race.
Running 28:58, Meg led the Mountain West ladies with a 28th place overall finish.  It was a fantastic race for Meg and is just one more step on her progression to the national class level. 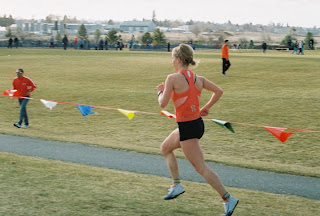 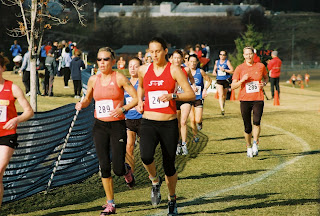 Rye (289) and Jenny (286) at about 1200 meters.
Jenny should be super excited for next year as she'll then be a new master's athlete.  Her time this year would have put her 3rd overall in the master's field.  Which then is a great segue into the results of the women's masters race.
After also running withe her Mountain West teammates in Louisville at Club Nationals, Janika Umile tested her mettle agains the master's women.  Running near the top group for much of the race, Janika ultimately finished 7th overall in the masters (and 3rd in the 40-49 age group) with a 32:23 time. 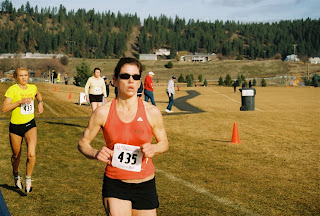 But, nobody was going to challenge super-master Colleen DeReuk.  At 45, Colleen just ran away from the field and finished her 8K in 27:27 (almost 2 minutes ahead of second place) - a time that would have placed her 12th in the open women's race.  Pretty amazing performance. 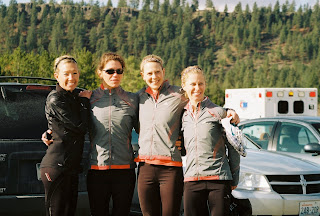 The Whole Mountain West Crew (Rye, Janika, Jenny, Meg)
So, all in all, it was some pretty impressive running by the elites and Oympians.  But, it was equally impressive to see our Montana ladies more than hold their own on the national level.
Full results can be found at http://www.usatf.org/events/2010/USAXCChampionships/OpenWomen.asp (Open Women ) and http://www.usatf.org/events/2010/USAXCChampionships/masterswomen.asp
Coming up next - open men.
The Muddy Buzzard
Posted by Tony B at 8:50 PM