Going into the men's open race, the clear cut favorite was, without doubt, Dathan Ritzenheim.  Nobody else in the field had credentials even approaching Ritz.  How in the world do you stack up against a guy who was a 2-time Footlocker XC champ, an NCAA XC champ, two time Olympian, American Record holder at 5,000, bronze medalist at Junior World XC, bronze medalist at 2009 world champs half marathon and 6th in the 2009 world champs 10,000.  The short answer - you don't.  In fact, you don't even pretend that you have any hope of beating him at what may be his strongest event (between XC, track and roads).

Sure, in the early miles, there was Ritz hanging in the middle of the lead pack. 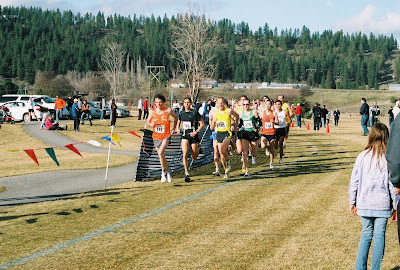 Then, after a few kilometers there's a small breakaway and it's a 3 man race between Ritz, Scottie Bauhs and Patrick Smyth.  But, all the while you just sense that Ritz is waiting for the moment to strike.  And, that moment came right at 9 kilometers.  At that point, Ritz just walked away from Bauhs and Smyth.  In the next 2K (1.25 miles) Ritz put about 20 seconds on the two challengers and just cruised on into the finish. 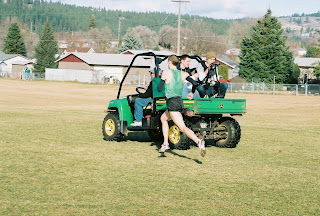 So fast the lead cart can barely stay ahead of him! 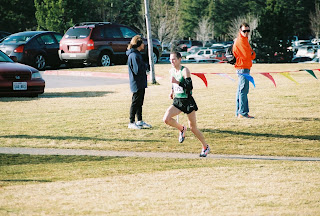 Dathan all alone with 1K to go.
In the end, Dathan ran the 12K course in a comfortable 34:33.  Dathan is clearly at the top of his game and has made it clear that performing well at World XC is high on his priority list this year.  Is a podium finish in the cards?  Here's to hoping that he pulls it off.

Rounding out the men's team was Patrick Smyth with a breakthrough performance in 2nd.  Chico State Alum Scott Bauhs continues his rise tot he top of the men's ranks with his 3rd place.  They were followed by Ben Bruce, Bobby Curtis and Ryan Vail.  Perhaps not our strongest men's team ever; but, a good group of young, hungry athletes looking to prove themselves on the world stage.
The men's open race was also full of Montanan's.  No fewer than 6 folks with Montana connections ran in the race.  And, all 6 finished within 10 places and 52 seconds of each other.  Top of the group was Brett Winegar (Club Northwest)(Kalispell HS, MSU grad) in 41st in 38:43.  He was followed by Jason Schlarb (US Air Force)(hometown ??, MSU grad) in 43rd at 38:53.  Jason Delaney (Boulder Running Company)(Polson native, college =?) in 45th in 38:57.  Right behind Jason was John Mentzer (Bozeman HS, Naval Acadamy ??) in 46th @ 389:58.  Next in was Kevin Murphy (Kalispell, MSU) (Club Northwest) at 48th in 39:12 and then Alan King (Big Sky Distance Project/Rocky Mountain Project) (Billings West, Dakotya Weslyen) in 51st at 39:35.  Pretty impresive performances.  But how about that pack running.
Here's a shot from early in the race. 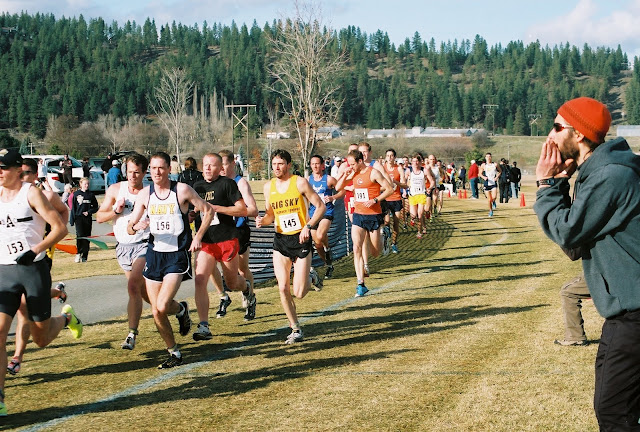 John Mentzer is #156 in the Navy Jersey on the left.  In the yellow BSDP jersey is Alan King.  Blowing his nose in the orange colors of Club Nortwest is Brett Winegar.  That may be Schlarb to Brett's right.  A couple of places behind Brett in the orange of Club NW is Kevin Murphy.  And, cheering on the right of the screen in the red hat and mountain man beard is Matt Seeley of Polson. 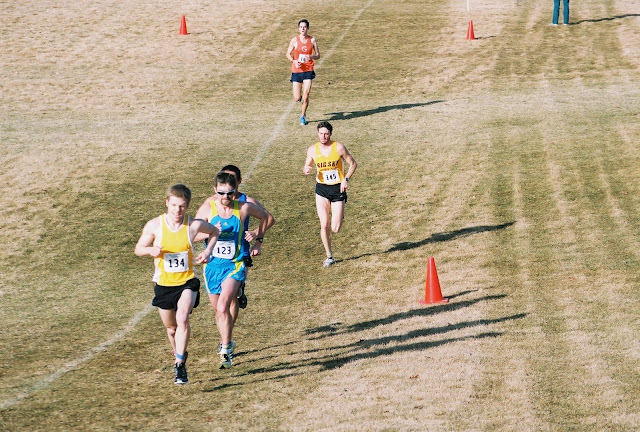 From a bit later in the race, here's Jason Delaney (123) with King and Murphy trailing close behind.
And, here's Alan late in the race stll looking good and strong. 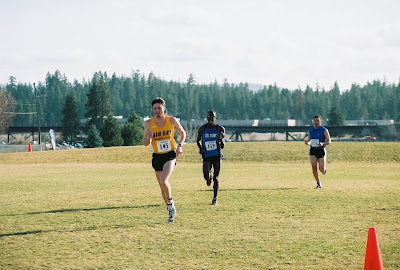 Just a great race all the way around.  Watching the front end guys is so impressive.  The combination of grace and power is amazing to see up close and personal.  And, it was great to see all the people from the Big Sky country holding their own on the national stage.
(To check out the full results -  see http://www.usatf.org/events/2010/USAXCChampionships/OpenMen.asp )
Made for a great day all the way around.
Next up will be the recap of the super impressive, blood and guts old guys race.
The Muddy Buzzard.
Posted by Tony B at 8:37 PM